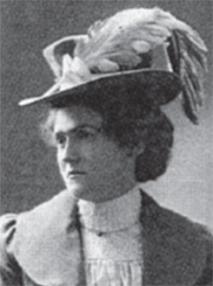 noted for her use of light and for her group portraits and photographs of animals. Born in 1864, she was raised in Illinois. She came to Monroe City after graduating from St. Mary’s College in Notre Dame, Ind., where she received top honors for excellent work in astronomy, logic and English composition. In 1890, she became a photographer’s assistant in a Monroe City studio. After three weeks, she took over the gallery.

Miss Johnson became a charter member of the Professional Photographers Association and submitted her first photograph at the first convention in Missouri. There were 35 photos entered, and she won third place. By 1906, she was the only woman among 25 photographers invited to exhibit photographs at the Association’s convention. She received 13 medals in international competition by 1907, and frequently had her work published in the Monroe City News.

Her breathtaking use of lighting was her trademark. She specialized in “cabinet pictures” made with an Aristo process. She also produced sets of cyanotype postcards with scenic views of various neighborhoods. Her photographs of Monroe City and its people once graced the cover of many national magazines and other photos were printed in the St. Louis Post-Dispatch Rotogravure. The Eastman Kodak Co. bought many of her studies and used them in advertisements. Her work was left to a photographer friend, William Bennett of Navarre, Ohio, who upon his death donated her collection to the Massillon Museum of Massillon, Ohio. Miss Johnson’s work remains the best pictorial history of Monroe City. She died in 1945 at age 80.