Bob Briggs started as a copy boy for the St. Louis Globe-Democra 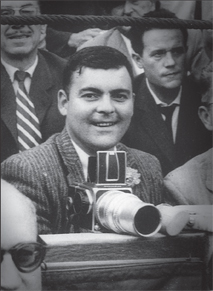 He was drafted during the Korean War, but didn’t serve in combat in that conflict. He was sent to Japan to replace an Army photographer who had been killed in a Jeep accident. Briggs photographed various aspects of Japanese culture and scenery. After returning to the Globe-Democrat, he introduced 35mm cameras to news photography in the region. He photographed every president from Truman to Nixon, construction of the Gateway Arch and Busch Stadium and the 1964 World Series victory of the Cardinals over the Yankees.

Briggs traveled to places like Spain to photograph bullfights and McMurdo Sound in Antarctica to photograph scientists. Briggs left the newspaper business in 1966 to work in public relations, but continued to incorporate photography into his remaining jobs. Briggs won several photography awards from the Associated Press, the St. Louis Press Club and the University of Chicago.