Only seven months after achieving his goal of becoming 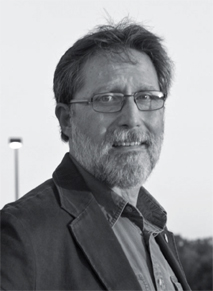 a photographer for a “good-sized daily newspaper” in 1977, Bob Foos realized that his heart longed for community journalism. He quit the Joliet Herald News in Illinois and enrolled in the Missouri School of Journalism. Foos got his start with The Carthage Press.

After a few months there, he stopped in unannounced at Rich Clarkson’s office at the Topeka Capital-Journal to show his portfolio and inquire about a job. Instead, he got some advice from Clarkson to attend Cliff Edom’s Missouri Photojournalism Workshop. He took the advice, twice. He attended the 1975 and 1976 workshops. He used the skills he learned at the workshops to improve his work at The Carthage Press.

Foos and his wife, Ann, had graduated from Wichita State University in 1972, Foos taking journalism classes. Foos was from Healy in western Kansas. Ann, who aspired to be a first-grade teacher, was from Hawaii. They met when they were freshmen at Emporia State University. Several years later, after his first semester at the Missouri School of Journalism, Foos received the AP Ernie Pyle Scholarship. He credits professors Angus McDougall and Daryl Moen as valued mentors. While in journalism school he worked at the Columbia Missourian and later for Charles Hedberg, publisher of the Centralia Fireside Guard, who provided him tips about the community newspaper business.

Upon graduation from MU in 1979, Foos bought into the flagging Webb City Sentinel. The revived weekly in southwest Missouri now has 2,000 subscribers, and both Foos and his newspaper publishing partner, Merle Lortz, have been honored by being named Distinguished Citizens by the Webb City R-7 Schools Foundation. The Sentinel is known for its excellent local photography and outstanding design. It has gained a reputation for publishing lots of pictures as well as thorough coverage of the city and schools.