During his 28-year career at The Salem News, Charles Stacey 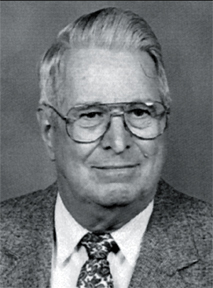 was a leader in Missouri weekly newspaper journalism in the use of photographs to report on life in rural areas. A native of Texas, Stacey was a U.S. Navy officer during World War II before entering the newspaper business.

He joined The Salem News in 1950, setting up a darkroom and teaching himself how to engrave photographs for the newspaper. Stacey’s photos won first place for five years in a row in Best Use of Pictures, Dailies or Weeklies, in the Missouri Press Association’s Better Newspaper Contest. As a result, the Association separated the category into two classes, dailies and weeklies. His photographs won numerous other awards in the Association’s annual contest.

Stacey began using color photographs, teaching himself how to use color film and to make separations for the printing press. Stacey served on many civic boards, including the Chamber of Commerce, Veterans of Foreign Wars, American Legion and the Salem Public Library. He was also active in the Salem Methodist Church. He was recognized by the Chamber as its Citizen of the Year.