Cliff and Vi Edom worked as a photojournalism team, mos 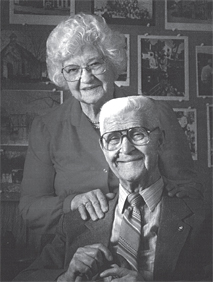 t notably in their Missouri Photo Workshop and in the founding and administering of the Pictures of the Year contest. The invention of the term “photojournalism” is commonly attributed to Cliff. The Edoms moved around Wisconsin and Missouri after their marriage in 1928. Cliff worked for newspapers and taught at a school of engraving before going to Columbia in 1943. He earned a degree in journalism, then organized and headed the first accredited photojournalism department in the country at the University of Missouri.

Meanwhile, Vi went to work for the Missouri Press Association where she was the assistant manager for more than 30 years. The Edoms founded the Pictures of the Year contest in 1943, Kappa Alpha Mu, a national photography honorary fraternity in 1944, and the Missouri Photo Workshop in 1949.

In the workshop, the Edoms and a staff of instructors took groups of students to small towns throughout the state for one week. The students’ pictures resulted in displays and books. The annual Missouri Photo Workshop continues to draw instructors and photojournalists from around the world. Cliff won numerous awards, including the Joseph A. Sprague Memorial Award from the National Press Photographers Association. The Edoms were honored in 1977 with the University of Missouri’s Honor Medal for Distinguished Service in Journalism. Vi also received the World Understanding Award from the Photographic Society of America and special recognition from the National Press Photographers Association. Cliff and Vi published several books. In 1993 the Edoms were inducted into the Missouri Press Association’s Newspaper Hall of Fame.