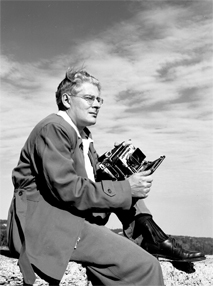 preserved the beauty and the history of the state through his photographs from 1945 to 1974. Born in Clinton, Mo., Massie’s interest in photography developed early in life at age 10 when he won his first camera, a $1.98 Brownie. While attending Clinton High School, he was employed as a printer’s devil at the Clinton Eye newspaper, learning Linotype operation.

After graduation he joined the International Typographical Union and worked at the Kansas City Star as a journeyman Linotype operator. During the day he began a freelance photography career. His interests followed him into the military where he served as an aerial photographer during World War II.

After the war, Massie was hired by the newly formed Resources and Development Commission, created to publicize the state. Massie’s job was to make photos for its publications and to supply prints to publicize the state in newspapers and magazines. He traveled 15,000 to 20,000 miles annually, producing 2,000 photographs a year.

An expert technician in the darkroom, he experimented with double-negative composites, time exposures, bas-relief, and infrared film for aerial photographs. In 1947 two of his photographs, “Missouri Dragon” and “Sunset on the Lake of the Ozarks,” were selected from 100 best news shots in a national contest sponsored by the University of Missouri School of Journalism and the Encyclopedia Britannica. Massie said he derived his greatest satisfaction from the “Missouri Dragon,” an aerial view of Lake of the Ozarks taken on infrared fi lm at 10,000 feet. He died in 1989 at age 77. In 1991 Massie’s widow, Henrietta, donated 3,500 of his photographs and negatives to the Missouri State Archives.