From Route 66 to baseball players to space, 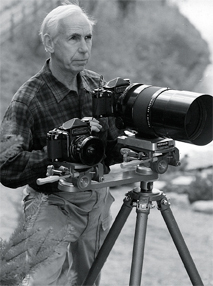 In 1943, his first year at the Globe-Democrat, Zehrt won the AP’s Picture of the Year award for capturing a glider carrying the St. Louis Mayor and nine others as it crashed to the ground. Zehrt was only 23.

Zehrt left the Globe-Democrat in 1955 to become a stock photographer, meaning he decided the subjects of his pictures and marketed them through a New York agency. Most notable are his photos of space, specifically his series of city skylines with the moon hovering above. He developed a relationship with NASA through his “astrophotography,” the photographing of objects in space.

His collection also includes hundreds of photos from Route 66, dating to 1947. He made a 1999 calendar using photos only from the Missouri part of 66. Zehrt made several cameras. His portfolio contains remarkable collections of animals in the St. Louis Zoo, of St. Louis Cardinals and other famous baseball players and of construction of the Gateway Arch. His sports photos have been in wide demand.