Joe Wood was a Renaissance Man, both an 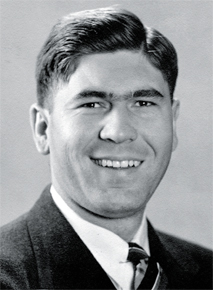 Born in Elvins, MO, he worked at the Globe-Democrat during the Golden Era of Journalism, when newspapers were the major link between the public and the events occurring locally and around the world. Wood said he photographed news: politics, from local elections to presidential campaigns, general news, and major sporting events. He photographed such celebrities as Judy Garland, Spencer Tracy, Clark Gable and Dizzy Dean. Once he played poker with President Harry Truman at the Jefferson Hotel in St. Louis.

In 1936, as a young Globe-Democrat photojournalist, Wood spent 10 hours with President Franklin Delano Roosevelt, who was visiting St. Louis while on the campaign trail. Wood was among the press members with the President when he toured the Jefferson Riverfront Memorial , the site where three decades later the Arch was built. Wood recalled the President walking with the aid of leg braces and arm crutches. In respect for the office and admiration for the man, it was an unwritten rule among news photographers at the time to photograph the President only from the waist up, Wood said.

Wood served in the Marine Corps in World War II, and he was a boxing champion in the Marines. In the 1940s, he became involved in a story that disputed Jesse James’ killing in 1882. Wood researched and wrote a book about J. Frank Dalton, who died in 1951 just three weeks short of his 104th birthday. Dalton claimed to be the notorious Missouri outlaw. Wood died at the age of 82 in 1996, in Kirkwood.