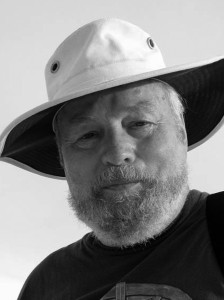 He left Antioch to edit a pair of weekly newspapers in Russellville, Ky. and then spent two years at the Santa Fe New Mexican as a feature writer, photographer, art page editor and book reviewer. He was hired in 1959 by the St. Louis Post-Dispatch with the choice of signing as reporter or photographer; he opted for the latter.

LaRouche was a staff photographer and ultimately became the picture editor for the magazine, Sunday Pictures for 15 years. Through “Pictures,” he was provided a platform for picture stories on life in St. Louis and America’s heartland, including covering urban development and poverty, agriculture and the endangered life of farmers, pollution and conservation, art and architecture, fashion and music. He retired from the Post-Dispatch in 2003 to enjoy spending time with his grandchildren with his wife, Sandy.

When the digital revolution of photography occurred, LaRouche leapt in with both feet, self-assigning as a photo editor, working on daily editions, and working as a night photo editor to help photographers, news editors and designers select from local and wire photographs. For 24 years, LaRouche also taught photojournalism and digital imaging at Webster University until he retired in spring 2015.