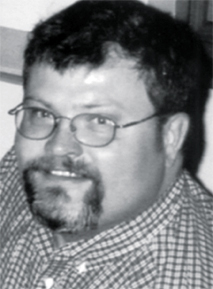 , a man of highest standards and integrity, a community leader, a husband, a father of two children, and a best friend to his community. Mr. Jaynes died of a heart attack in late July 2008 at age 38.

He had been a photographer since 1989 for the Sikeston Standard Democrat and owned Jaynes Photography. Mr. Jaynes was born April 3, 1970, in Sikeston, attended high school in Sikeston, was graduated from Thayer High School and attended Southeast Missouri State University in Cape Girardeau. Mr. Jaynes always was striving to make his next photograph better than the last, and he eagerly shared his knowledge and experience with summer interns and new employees, said his managing editor, Jill Bock.

Mr. Jaynes was a skilled technician with a camera who possessed that true “eye” for the right photo at the right moment, said Michael Jensen, publisher of the Standard Democrat. He tirelessly chronicled the events of Sikeston from “grip and grins” to some eye-popping feature art. His spot coverage earned him the admiration of an entire generation of young athletes and their parents. Mr. Jaynes had a close relationship with his community, including the Department of Public Safety. The Department had made him an honorary member. He carried one of the Department’s pagers and was called out at all hours to photograph accidents, fires and special operations.

Community organizations that Mr. Jaynes devoted himself to were the Kenny Rogers Children’s Center and the Sikeston Jaycees and their Bootheel Rodeo. He contributed countless hours of his time and all of his photographic talents to helping ensure the success of both organizations. He also took over, revived and expanded the Standard Democrat’s annual Community Christmas Campaign, bringing in many new partners and becoming Santa Claus to thousands of Sikeston families who otherwise would have had little to celebrate during the holidays. His skills as a photographer were exceptional. His personal dedication to leaving a lasting impact on his community was even greater. Mr. Jaynes is survived by his wife, a daughter, a son, five brothers, a sister, his mother, father, stepmother and stepfather, and many nieces, nephews and friends.